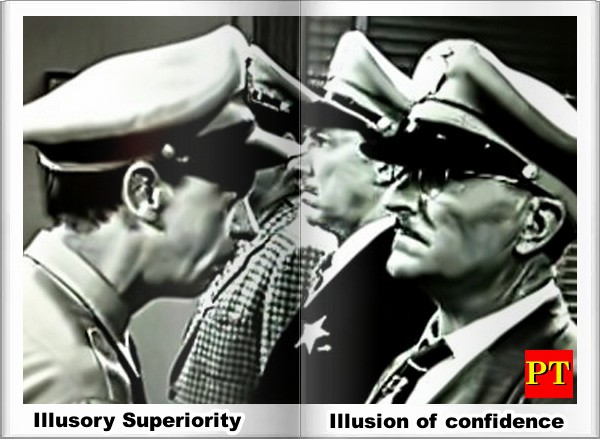 Have you ever asked your self why some people are successful and others a complete failure?
Have you ever wonder why the ACOG's are such failures?

You know what narcissism is but have you ever heard about the Dunning-Kruger effect?

The Dunning-Kruger effect is a cognitive bias. It states that incompetent people are also incompetent in assessing their own performance. Therefore, less competent people think their performance is competent, while smarter people focus on their own flaws. It explains, among other things, how idiots and insane people are able to get ahead by overestimating their value and getting fools to agree with them.

Social psychologists David Dunning and Justin Kruger (Cornell University) describe this as the cognitive bias of illusory superiority results from an internal illusion in people of low ability and from an external misperception in people of high ability; that is, "the miscalibration of the incompetent stems from an error about the self, whereas the miscalibration of the highly competent stems from an error about others."[1]

These are people who despite making error after error, think they are performing competently when they are not. [2] Studies have shown that the most incompetent individuals are the ones that are most convinced of their competence. At work this translates into lots of incompetent people who think they are superstars.

“One of the painful things about our time is that those who feel certainty are stupid, and those with any imagination and understanding are filled with doubt and indecision.”
― Bertrand Russell

A corollary of this effect is that the most competent people often underestimate their competence. This is a result of how you frame knowledge. The more you know, the more you focus on what you don’t know.

A summary of a paper entitled “Unskilled and Unaware Of It: How Difficulties In Recognising Ones Own Incompetence Lead To Inflated Self-Assessments” in the Journal of Personality and Social Psychology can be listed this way:

If they can be trained to substantially improve their own skill level, these individuals can recognize and acknowledge their own previous lack of skill.

Next time someone gets fired over at the RCG, they should give Dave Pack a copy of this paper before they walk out the door for the last time.

A self-serving bias is any cognitive or perceptual process that is distorted by the need to maintain and enhance self-esteem, or the tendency to perceive oneself in an overly favorable manner. It is the belief that individuals tend to ascribe success to their own abilities and efforts, but ascribe failure to external factors.[3] When individuals reject the validity of negative feedback, focus on their strengths and achievements but overlook their faults and failures, or take more responsibility for their group's work than they give to other members, they are protecting their ego from threat and injury. These cognitive and perceptual tendencies perpetuate illusions and error, but they also serve the self's need for esteem.

As the inimitable Jon Ronson once wrote, “Psychopaths make the world go around… society is an expression of that particular sort of madness… I’ve always believed society to be a fundamentally rational thing, but what if it isn’t? What if it is built on insanity?”

It has been suggested that this bias is quite widespread in Western cultures including the United States and Canada, and is less frequent in Eastern cultures like China and Japan. Why is this? Cultures such as the United States place a greater emphasis on personal achievement and self-esteem, so protecting the self from feelings of failure. In collectivist cultures in the East, are more likely to attribute personal success to luck and failures to lack of talent. Some research has found that people who share in close relationships tend to be more modest. Your friends or your partner, in other words, keep you in check with honest criticism about when a bad situation might be part of your own doing.

In the end, self-serving bias helps to protect the self-esteem. In the long run, however, it causes more harm than good, as the person loses the opportunity to improve. They get so used to it, that instead of addressing their problems, they look for external factors to blame. It goes without saying that, if you take credit for something that you don't deserve, it can affect your credibility.

To understand the Armstrong churches of God, one must understand human psychology. Why do people do what they do? The human being never changes. What occurs today has occurred in the past and will again far into the future. Each group leader below thinks he is superior over the other.

Starting with Herbert Armstrong we saw how superior he thought he was with his self-serving ways. People who wanted a high place sought after him and served him as “yes” men. Many later became high ranking ministers. It was Herbert Armstrong who laid the foundation for the disaster known as the "churches of God" that we see on display now days. He trained the ministry, allowed the abuses, and rewarded those who obeyed him. As you can see, they learned well from the 'apostle.'

In the present-day we see the likes of David C. Pack who is as destructive as fire is to a wheat field.(4) He is the most destructive person in the modern day of Armstrongism in my opinion.

We have seen what Meredith did with Global when he was given the boot. We saw what happened within the LCG cult some years later. Eight dead and a pronouncement to the public by unofficial spokesman Bob Thiel that 'we don't do crosses.' Talk about a kick to the teeth aimed at a public that took compassion on the LCG!

Since that time, Bob Thiel has started his own Armstrong based family franchise, calling his new upstart the "continuing church of God." Thiel has always sought the position of prophet when he was in the LCG. Meredith blew him off and in a huff, Bob fell away and started his own heretical group. Thankfully the damage he will do will be little here in the states. Whatever goes on in Africa is likely to stay in Africa. We may never know what goes on over there.

Gerald Flurry. Full of years but not a damned bit smarter than he was 20 years ago. He will pass on soon enough and then the ball will be in Stevie's court. What he does with it who knows. Hopefully he won't continue the practice of destroying families.

Ron Weinland, once stood before the public telling them he is a prophet of God and the end is coming soon. That time has passed and his prediction came to naught. Weinland made a fool out of himself and to this day still continues to engage in prediction addiction. If Weinland was a true prophet of God, why didn't see his tax evasion conviction coming down the road?

And finally we have a little runt of a man by the name of James Malm who gives some incredibly ignorant advice on the subject of sex. You can read it here. Why anyone with a brain would listen to this authoritative moron is beyond me, but he serves as a perfect example of someone who thinks they are intelligent but in reality is a hook line and sinker simpleton.

On and on we could go into the sins and misdeeds of the leadership, but in the end the only ones who could call these people to account are those who support these individuals either financially or personally. Nothing ever changes until it is forced on a group(s). Will a change ever come to pass? Perhaps not.

After the killings in Meredith's cult of horror's we never saw any change. What we saw was blame and abuse heaped on to Terry Ratzmann as if he was the reason for this tragedy. He was but a symptom of a larger problem that started far before Rod Meredith's reign. The real author of this mass murder was Herbert Armstrong. Meredith lacked the intelligence and foresight to see what he was doing to his flock of followers, or he just didn't give a shit. Either way, the man has played his cards and the fruits of his 'works' are on display for the world to see.

So what will it take to change the ACOG's? A Waco event.

"Armstrong was a man utterly without honor, without principles, without a shred of genuine decency or patriotism. He was the ultimate exterminator of religious life for thousands, and the grand compelling creator of a vast army of atheists."

All materials contained in this Website including but not limited to the text and images, are protected by copyright laws and may not be reproduced, republished, modified, distributed, transmitted, displayed, broadcast or otherwise exploited in any manner without the express prior written permission of the Editor. Any third party materials posted, filed or otherwise communicated to this Website become the copyrighted property of The Painful Truth.

Copyright 2019 BY THE PAINFUL TRUTH | ALL RIGHTS RESERVED